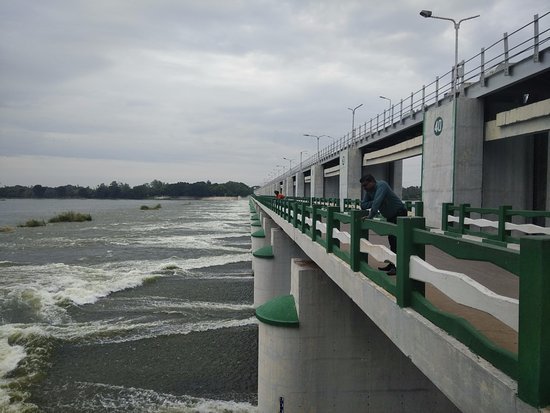 Divided into three sections, the 685-m-long Mukkombu Dam or Upper Anaicut is located on the outskirts of Tiruchirappalli. Drawing inspiration from Kallanai Dam, built by Karikalan Chola in the 2nd century, Sir Arthur Cotton supervised the construction of the dam in the 19th century.

Also known as Upper Dam, the construction of this site was completed in 1838 on the banks of River Kaveri; it is at this point Kollidam, a tributary of River Kaveri branches out.

Upper Anaicut or Mukkombu is about 18 kilometers (11 mi) west of Trichy and 2 kilometers away from Jeeyapuram at a point where River Kollidam branches out from the main river, Cauvery. It is a lovely picnic spot skirting acres of verdant greenery. The place also has a well-manicured park. Mukkombu is about 685-meter long (2283 foot)

Kollidam is the northern arm of the Kaveri, which branches off from the main stream about 9 miles west of Thiruchirapalli. Across the head, where it branches from the Kaveri, stands the Upper Anicut, the dam constructed to prevent the Kollidam which runs in a lower bed than the Kaveri, from abstracting too much of the water, and so injuring the irrigation in Thanjavur dependent on the main stream.